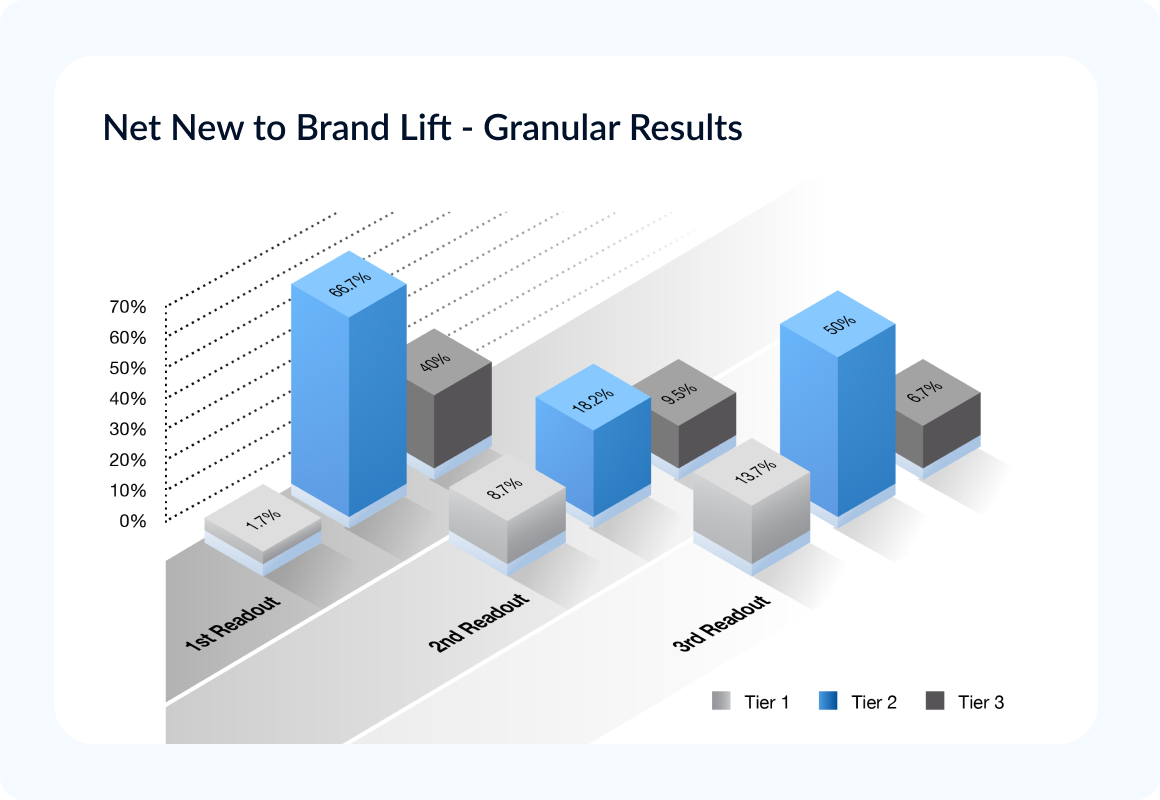 Unleash the power of real-world ROI and make intelligent in-flight optimizations, in just a few clicks.

Understanding the real-world impact of your campaign is key in future targeting and media spend. For media run inside or outside of our platform, Lasso Measurement offers the granular real-world data needed for immediate adjustments on ad-spend, audience targeting and creative display. By shrinking the measurement timeline from several months to weeks, we enable unparalleled speed from insights to optimizations so brands can maximize ROI across any channel.

Lasso was tasked with analyzing the effectiveness of media at driving incremental brand writing behavior for a migraine treatment therapy. Our client wanted to better understand the relationship between strategically placed media and the ultimate impact on script lift. Lasso conducted three separate net impact studies on Total Transactions (TRx), New Transactions (NRx) and New-to-Brand (NTB) individuals during a one-month post-period. Our unique identity resolution matched HCPs on a 1:1 basis using age/gender/state geographic data in combination with pre-period Brand writing behaviors to ensure the most qualified HCPs were selected. Once matched, the activity of the Test and Control groups was aggregated and monitored through the measurement dashboard. The results were interpreted and used to adjust the client’s strategy while the campaign was still running, ultimately increasing their ROI and visibility.

The Lasso measurement platform provides the insight and ability to intelligently optimize media spend with deterministic net level reporting. Using our internal Identity Resolution allows for a more in-depth look at how media exposure and script lift are related in real-world interactions. By linking HCPs, patients, and claims data, we’re able to attribute prescription writing and filling to campaign media.

Our platform cuts the measurement process down from months to a matter of weeks, allowing you faster reporting turnaround and optimization windows. The speed to insights is key in re-allocating budget to support higher performing campaigns. In doing so, you are able to increase campaign ROI and real-world transactions. Let’s dive a little deeper into how this process works:

Overall, our client saw increased benefit to their brand and their campaign success. Each of the three campaigns displayed a strong lift across TRx, NRx and NTB when compared to the qualified control group.

As anticipated, prescriptions written by HCPs continued to be filled at a higher rate than their matched controls, potentially indicating a strong retention amongst their patients. Looking at NRx lift specifically, we saw that HCPs exposed to our client’s media were showing a 23% lift over the control group. Not only was this an excellent benchmark, but also a strong performance for any media campaign. These new prescriptions indicated elevated new writing behavior following media exposure and ultimately an increase in sales for our client.

Lasso was asked to split out three tiers of the target list available for optimization based on the TRx, NRx and NTB results above. This table explores the new-to-brand growth from each of the HCP tiers. Interestingly enough, Tier 2 HCPs saw the highest benefit following exposure to media suggesting a trend some might not expect based on standard target list organization. Having this insight opens up the door to new approaches that might be a change from what has historically been done.

Seeing the impact of media campaigns on script lift allowed our client to determine the success of each campaign and make in-flight adjustments to maintain high performance. In the same manner, having visibility on which HCP tiers were responding best to media allowed our client to also increase spending towards the most engaged audiences.

Tier 2 HCPs showed the highest lift of the three audiences. These Tier 2 HCPs are most likely relevant script writers, but don’t typically represent the most valuable prospects for this brand. This key insight showcases that these “second best” HCPs were the most influenced by media and helped drive revenue for the brand.

The highest tier of HCPs saw little net benefit following exposure to media indicating the difficulty to change their already highly relevant behavior. Since these HCPs are already script writers, it was beneficial for our client to spend less of the budget on targeting Tier 1 HCPs and re-allocate that portion towards a different audience.

By partnering with Lasso and utilizing the information from these net impacts, our client ultimately decided to shift spend towards Tier 2 physicians. Having this speed to insight saved our client time and money. They were able to make in-flight adjustments as needed and put additional budget behind their highest performing audience, resulting in increased ROI.

Get deeper, faster, and better campaign insights with Lasso’s Measurement Suite. Our media tagging and identity resolution is done internally, which eliminates data loss and unnecessary delays in reporting, allowing you to optimize while media is still running instead of waiting until the campaign is finished.

Ready to see how the industry’s leading measurement solution can take your campaigns to the next level? Get in touch with your Lasso representative or book your free demo here.