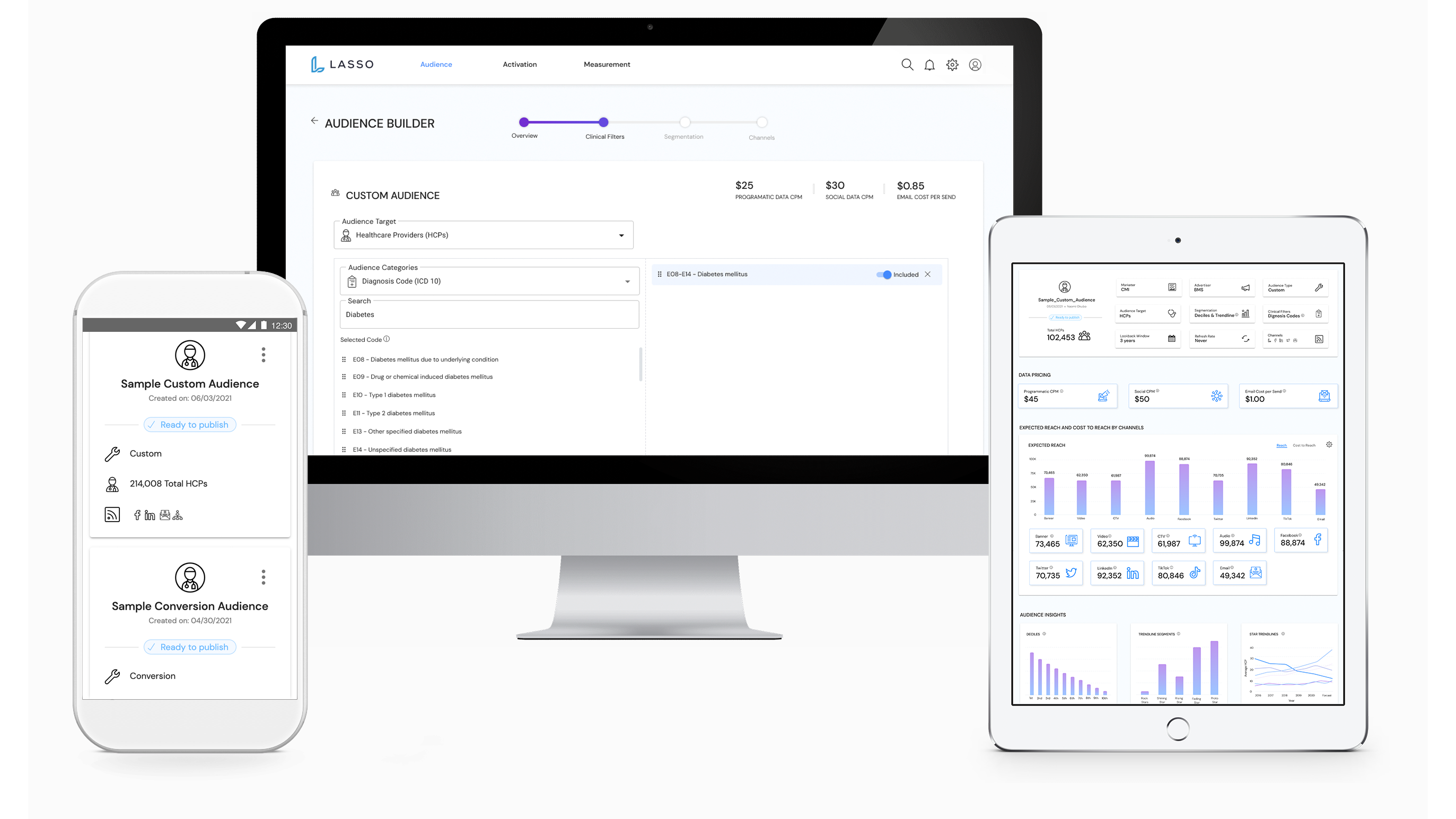 When a client came to us with an HCP-targeted campaign for a Breast Cancer drug, we offered two custom-built claims-based audiences: One comprised of HCPs who recently prescribed competitive drugs, and one comprised of HCPs who recently rendered breast-cancer-related surgeries. Given the size of the budget, the client agreed to test Lasso’s curated audiences alongside his client’s HCP target list, using two different sets of messaging (First & Only vs. Prevent & Protect) targeted to each audience.

As such, we scaled the allocated budgets accordingly (i.e., the Competitive RXers received a much lower budget vs. what was allocated to Procedures Rendered & Target List). It’s also worth noting that, while these counts are not de-duplicated, we structured targeting to exclude overlap between the client’s Target List and Lasso’s Curated audiences when targeting Curated Audiences.

After just 1 month of delivery, the results were compellingly in favor of allocating as much additional budget as possible to Lasso’s curated audiences.

When comparing the CTRs of three ad groups for a breast cancer campaign, Lasso’s curated audiences show a 2-3x higher rate than a standard target list.

By utilizing medical claims data to specifically target the most relevant HCPs, Lasso’s planning capabilities can strengthen the relevancy of your audiences.

For the same three Ad Groups, when layering in spend for the month of February we can see that Lasso’s curated audiences achieve on average lower costs per click, which further shows the use case of Lasso’s planning capabilities.

By utilizing Lasso’s instant optimization capabilities, our users are able to allocate budget towards AdGroups that are reaching their target audiences with ease.

For the same creatives (P&P – Prevent and Protect and F&O – First and Only) we took a deeper look at some other interesting performance indicators that further show Lasso’s capabilities. When comparing the curated audiences (blue) to the standard target list (grey), the size and scale of each audience does have an impact on the interpretation of performance. Looking at the two Ad Groups with similar audience reach, Procedures Rendered reached 70% of its max audience at cost of $0.33 per HCP, compared to the HCP Target List, which reached 83% of its target list at a cost of $1.13 per HCP.  The most important thing to know about those two Ad Groups, is that their max audience reaches are almost identical in size (7,956 vs. 7,900 HCPs).

Reaching audiences cost effectively at scale is just one of many benefits of the Lasso platform.