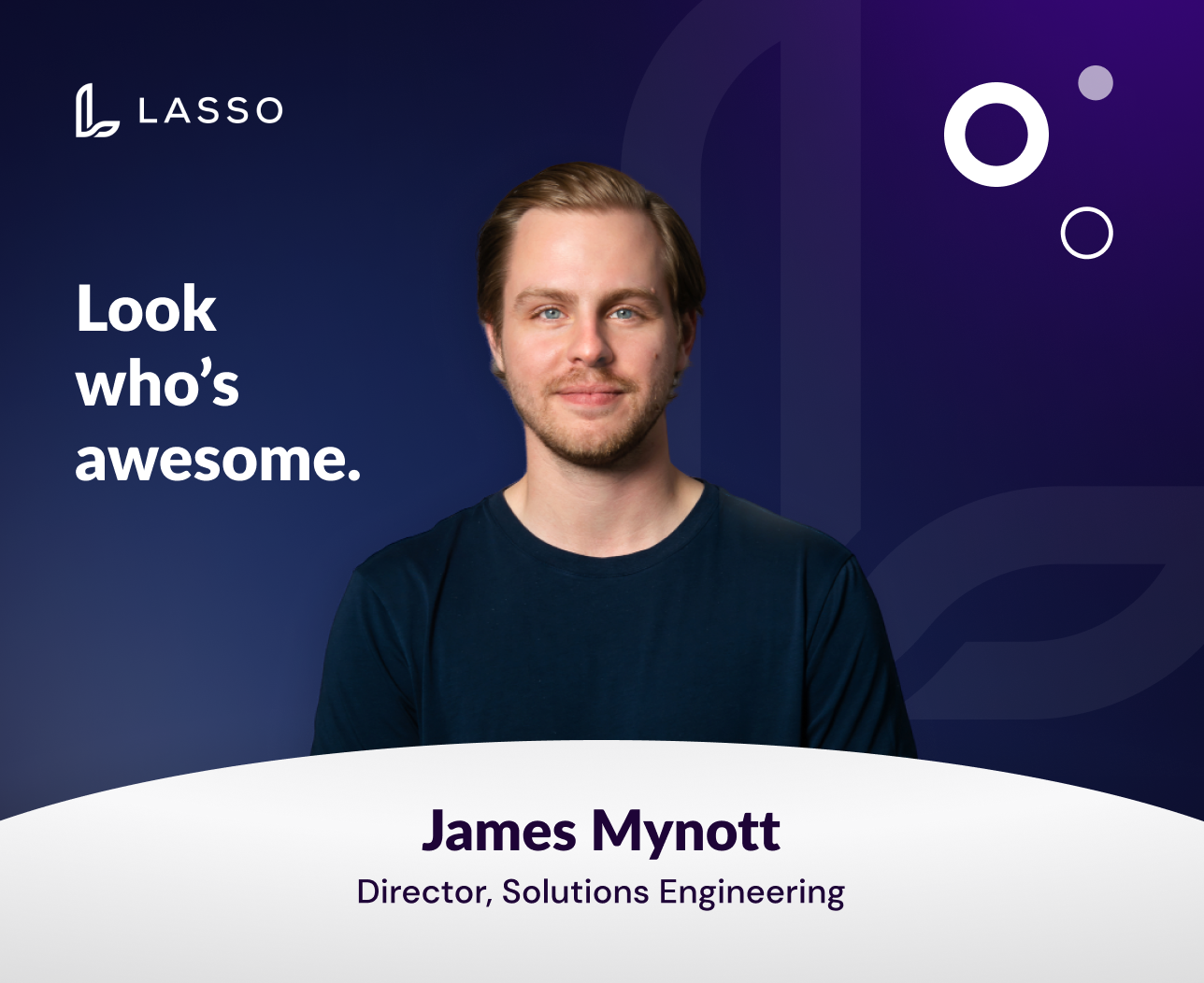 Meet James Mynott, our Director of Solutions Engineering and one of our Q3 2022 Lassonian Spotlights! He’s been with Lasso since March 2021 and has really enjoyed being able to match Lasso solutions to the clients who need them. “Most clients aren’t aware of how far reaching our capabilities are and don’t take advantage of all our solutions. It's really cool to be able to make connections for clients, even when they didn’t realize they were missing a piece,” James said. He also enjoys working on such a fast-growing platform. “We are always pressing the envelope for the newest technology and are always seeking new answers and looking for ways to improve, whether that feedback is from internal or external stakeholders.”

Having nominated him for this spotlight, James’ teammates were quick to recognize how instrumental he is to our team. One who works closely with him, said, “he has been a very supportive and helpful mentor/manager in getting me up to speed and onboarded with Lasso and as a solutions engineer. I would not be where I am now without him.” Another coworker noted, “I'm not sure how we would operate as a company without him.”

Before coming to Lasso, James spent several years in a similar role in the industry, but saw Lasso as an opportunity to scale and design something more flexible, to allow the smaller players the same access as the bigger players. He was especially excited about being able to join a startup (of only about 20 at the time) as it allowed him to provide value in a lot of different ways and learn from many different areas.

Although he works in Solution Engineering now, he originally studied environmental engineering and focused on wastewater treatment plants. During this time, James’ biggest takeaway was he learned how to digest and react to new information to become more knowledgeable. He knows this skill has been especially beneficial to him during his entrance into the Lasso world, especially in learning all the acronyms used on a daily basis!

When he’s not busy creating great solutions for our clients, James loves socializing. To him that means dinners, concerts, hanging out in Central Park - he even goes to the Yankee game almost every week. He’s a fan of getting out in nature and “finding time to disconnect and leave my phone for a bit.” He loves Brooklyn for its concert offerings, mentioning that although he prefers EDM, he really just enjoys listening to new music and finding new artists.

When asked for a “fun fact” about himself, James offered, “to this day, I can eat an entire cheese pizza by myself and I’ve actually been in two eating contests. One of them I ate eight scoops of ice cream in four minutes and ten seconds, I came in second and lost by ten seconds. The other was a Wendy’s Jr. Cheeseburger eating contest. I ate eleven, the guy who won ate thirteen.” If his love of food wasn’t apparent enough, he also has two cats named Cashew and Hoagie!

Thank you for being you, James, and for making Lasso the best it can be!