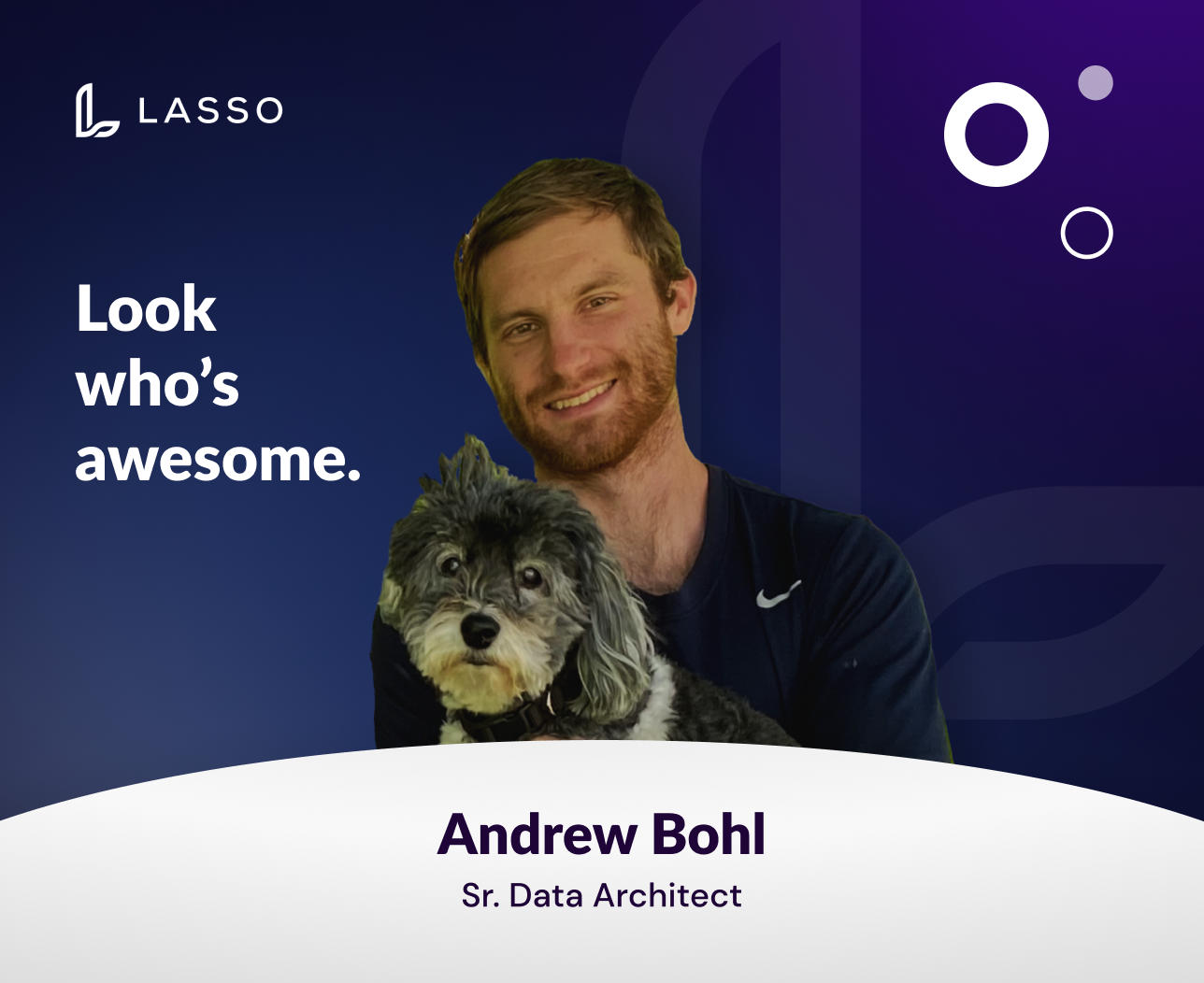 Meet Andrew Bohl, Lasso’s very own Senior Data Architect and our Q2 Lassonian Spotlight! Andrew joined Lasso in April 2021 as the sole data person responsible for building the backend of our platform. Since then he has built up his team, onboarded data partners, streamlined data flow and automated key parts of the Lasso platform.

His favorite part of working at Lasso is automating processes that really don’t need to be manual. “I feel incredibly lucky because I love my job and I really enjoy data - I really enjoy starting from nothing, a blank file, and then a couple days or weeks later you’ll have a full module set up with 10,000 lines.”

He has been an invaluable part of our success and his teammates were quick to recognize this by nominating him. One said, “Andrew literally makes Lasso run. There are 10x'r engineers... Andrew is a 50x'r.” Another wrote, “I swear there has to be more than one instance of this rockstar in existence due to the sheer amount of accomplishments every day,” adding that Andrew’s vast amount of working knowledge is nothing short of amazing!

When he graduated from Chapman University in 2017, Andrew didn’t know what he wanted to do. His Economic System Design professor discussed option based drafts in fantasy football and wrote a program to develop an optimal bidding strategy and pick a team. Trying it himself, Andrew learned Python, built the program and bet on a weekly level. A big Patriots fan, he eventually realized he was no longer watching football for fun but was watching to analyze each play. Through the process he learned how much he enjoyed Data Engineering. So, Andrew went back to get his masters at the University of Texas and graduated with a degree in Data Science. He was then hired as a business intelligence analyst at an ecommerce company called Volusion. Originally on a team of 6, Andrew’s coworkers left the company until he was the only one left in the Data department. He took on the role of their only Data Engineer where he taught himself the entire platform and moved up to Data Architect. He was then recruited by Lasso where he interviewed, was intrigued by the opportunities, and joined our team!

When he’s not busy being a data rockstar at Lasso, Andrew loves exercise and go to the gym 5-6 days a week as a stress reliever. He’s also involved in several leagues, playing soccer on Saturdays and lacrosse on Sundays. This summer, his soccer league recreated the World Cup, dividing the ~100 local teams into 6 divisions, and Andrew thinks his team might have a good shot at making the final!

Andrew loves living in Austin,TX and being in a city where people lead active lifestyles and enjoy outdoor activities. His favorite place to go, even when it's 100°F out, is Meanwhile Brewery - the perfect place to sit outside in Adirondack chairs, with a cold beer in his hand, listening to a local band! When asked what makes him happy, Andrew smiled and said, “I bought a Jeep Wrangler in January and I now fully understand the Jeep wave. Waving to someone and having them wave back makes me irrationally excited! Sometimes it even makes my day.” He also enjoys driving with the top down but learned the hard way that sunscreen is a necessity when your car doesn’t have a roof!

Thank you for all that you do Andrew - we’re lucky to have you on the Lasso team!